You are here: Home / Nuwave Pic Gold vs Titanium

This post may contain affiliate links for which I could earn a commision. 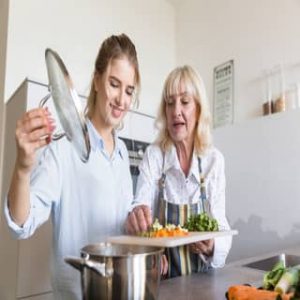 you’ll know that there are different options available.

If you find yourself a bit confused to what the differences are we’re going look at the Nuwave Pic Gold vs Titanium to see if there is much in difference between them and whether it’s worth paying extra money for one over the other.

We’ll give you an overview of each of these induction cookers and let you know what the differences are. If you’re interested in the Nuwave Pic induction hotplates CLICK HERE

to find out more about them.

is a circular cooktop with a 12 inch diameter cooking surface and an 8 inch heating coil. This is a portable cooker with a weight of 9 lbs so it is light enough to carry but heavy enough to stay put on the worktop while you are cooking. The 30242 uses 1500w of power but that is adjustable so that you can use 600w, 900w or 1500w depending on what you’re cooking.

The NuWave 30242 has a cooking temperature range of 100F – 575F with 10 degree increments giving you incredible control especially when you’re cooking with oil you can set your temperature just below the smoking point.

There are 6 preset temperature buttons on the front of the burner:

These push button options allows you to quickly start cooking without having to set a specific temperature yourself and if you prefer to use Celsius rather than Fahrenheit you can change the screen at a touch of a button.

Not only can you set the temperature but there is also a timer so if you know you want to simmer a pot of soup for example for an hour you can set the timer for 60 minutes and it will turn off automatically.

is 70% energy efficient as it only heats up the pan itself rather than the cooking surface. The benefit of this in the kitchen is that it doesn’t heat up the surrounding area as much and the safety aspect of this is that any part of the cooktop not touching the pan will be cool to the touch.

This is great countertop burner for older people and students as there is less chance of burning yourself on the cooker because any heat in the cooking surface disperses quickly as it is only thermally transferred from the heat of the pan. The clean up is easier too as any drips of food don’t burn onto the top so it can be wiped clean with a damp cloth.

Induction cooktops require magnetic based pans for cooking and this burner comes with a 10.5 inch frying pan so you can use your Nuwave immediately although it’s easy to check if your current pans will work by checking them with a simple fridge magnet, if it holds onto the base your pan should work.Read a full review here.

cooktop uses up to 1800w and it has 4 settings to change that to 600w, 900w, 1500w and 1800w depending on what you are cooking. This means you can cook quicker the higher the wattage and this cooker can boil water in 60 seconds.

There is a cooking temperature range of 100F to 575F with increments of 5 degrees to give even greater accuracy. It is circular in shape with all of the control buttons on the front. With a weight of around 7lbs it is easily portable to use in any area of your home or to take on holiday.

If you have an induction cooktop countertop burner

then you need to use magnetic based pans

as they have to react with the electromagnetic waves produced to heat up the pan to cook.

You have 6 preset temperature controlled buttons on the front of the unit which can be adjusted with the up and down buttons, you can also set a timer if you don’t want to stand over the cooker. There is a programmable function where you can set step by step cooking control, if you want to boil something for 5 minutes then simmer for 30 minutes you can set that up and it will do each step automatically. You can also set this up with a time delay too.

If you have a precision induction cooktop then it won’t work until a pan is place on the cooking surface and it also stops working when you remove the pan from the surface. This is a great safety feature but can be annoying if you are just needing to remove from the heat for a second to check something.

which means you can take your pan away from the cooking surface and if you replace it within 10 seconds it will carry on cooking without you having to start the burner again.

If you want a NuWave precision induction cooktop

then both of these above offer similar cooking capabilities. What they have that is the same is the fact that they are both portable and both need magnetised cookware. The temperature range of cooking and preset buttons on the front of the cooker are the same. They both have timers with a delay option and are built solidly enough that they can withstand a weight of 50 pound.

What’s different is that the NuWave Titanium

offers 1800w for fasting cooking times, it also offers increments in the temperature at 5 degrees rather than the 10 degrees of the Gold

giving a little more accuracy. The Titanium is also a little bit lighter in weight and offers a larger cooking area on the cooktop. For these improvements you pay a higher price.

Both of these NuWave cooktops offer a quick, safe cooking capability but if you want a bit more detailed control and an opportunity to cook even quicker and you don’t mind paying extra for it then the NuWave Titanium 1800w

will probably suit you. If you think that the NuWave Pic Gold

You can find out more about which cookies we are using or switch them off in settings.

This website uses cookies so that we can provide you with the best user experience possible. Cookie information is stored in your browser and performs functions such as recognising you when you return to our website and helping our team to understand which sections of the website you find most interesting and useful.

Strictly Necessary Cookie should be enabled at all times so that we can save your preferences for cookie settings.

If you disable this cookie, we will not be able to save your preferences. This means that every time you visit this website you will need to enable or disable cookies again.